For this episode of Socio’s EventHack Hybrid Games, the hackers presented their best solutions for decoding hybrid event data and technology.

Team We Like Big Data and We Cannot Lie: Use Creative Tech and Data Collection to Solve the Mystery of Elusive Engagement

Networking and gaining knowledge rank as primary objectives for anyone who attends a professional conference. But how can event planners ensure attendees find the right connections in a sea of faces, and pick the right informational opportunities on a crowded itinerary?

Such were the mysteries that Team “We Like Big Data and We Cannot Lie” sought to solve for an imaginary client, the World Association of Detectives. The agents on the case in this episode of Socio’s EventHack Hybrid Games were Darcy Gabriele, Strategic Account Executive with Eventcore, an event solutions provider based in Seattle; and Karen Hartline, Director of Events for Home Point Financial, based in Ann Arbor, Michigan.

The go-to gumshoes focused on cracking the case of WAD’s annual conference, an in-person event, with creative data collection and high-tech tools, such as a matchmaking smart badge. They also offered timely suggestions for translating the tech tools they discovered to tackle distinct engagement challenges that arise with digital and hybrid events.

With their call for increased data collection, they emphasized the need for transparency, opt-out provisions, and care with attendees’ privacy every step of the way.

Event organizers commonly ask participants to submit a profile in advance that can serve as an introduction to their fellow attendees. But these profiles sometimes fall short on personality, with one blurring into the next.

To avoid that possibility and to take advantage of increased access to multimedia tools, Team WLBD suggested asking for brief video profiles to supplement the usual written Q&A. Videos could be submitted and accessed digitally before in-person, virtual, and hybrid events, creating a virtual springboard for networking.

An event badge these days can do much more than tell people your name. These intrepid detectives uncovered one you can load with profile information. It then lights up when like-minded attendees cross paths, creating an easy conversation starter for people who perhaps named similar goals or face similar challenges.

This smart badge from Proxfinity, the team said, can also track wearers’ movements. Using that data, the technology can generate daily reports for the wearer to highlight new connections, as well as recommend other people at the event to seek out.

Detective Gabriele explained, “It’ll say, ‘Hey, you didn’t connect with this person, but based on where you’ve been, the sessions you’ve been attending, the booths that you’ve stopped by … you guys should really find each other.”

While badges aren’t standard-issue in virtual events, Team WLBD envisioned a virtual equivalent — perhaps a kind of digital business card — that could also help virtual or hybrid event attendees connect by highlighting similar interests. For example, detectives who attended this conference could continue to receive alerts and encouragement to engage as they access session recordings after the event.

Curate a Playlist of Session Recommendations for Event Attendees

In a large event, figuring out which sessions to attend can be as difficult as finding the right people to meet. That’s why Team WLBD suggested using data to generate tailored itinerary suggestions for each participant.

Aside from drawing on attendees’ stated interests, the session playlists could use data on audience engagement gathered through biometrics monitoring, including facial expression analysis. This could let tomorrow’s attendees know which of today’s sessions were a hit with audiences. The data could also be shared as feedback for presenters and sponsors.

Virtual events tend not to last as long or present as much competition for a specific time slot as in-person conferences, but the prospect of using interest-mapping and biometrics in digital environments still merits investigating, the event-planning detectives said.

Continue to Utilize Data After the Event

Much of Team WLBD’s work focused on improving engagement and boosting benefits for event attendees, but the detectives also emphasized the value that data can provide event hosts and sponsors afterward.

The detectives imagined sales teams using the collected facial-expression and movement-mapping data to score potential leads among attendees, as well as to recruit volunteers and future association leaders. They also emphasized the need for a great data analytics partner to ensure private information is securely stored and accessible for ongoing reporting.

Nick Borelli: Score Attendees on a Multi-Metric Scale to ID Steps Toward Conversion

Replace shallow post-event surveys with a living dashboard of diverse attendee data distilled into a “universal number of truth.”

Whether in-person, virtual, or hybrid, most corporate events share the goal of converting as many participants into leads and sales as possible, while moving the rest toward conversion. But how can event planners know whether they’re achieving that objective and with which attendees? How can they assess event features to identify those worth incorporating and promoting to boost success?

Borelli’s answer: a multi-metric dashboard of attendee data that determines how close event attendees are to conversion. A score of 100 would indicate an ideal, conversion-inducing event experience, whereas a 0 would signal a total failure. Embedded in that overall score could be weighted component scores for key aspects of the event.

Borelli called the overall score “a universal number of truth” that could help organizations identify the best next steps to take in targeting each attendee, as well as to improve future events. Planners would analyze the component experiences that produced actual conversions, then modify planning and scoring for future events to ensure similar experiences for more people.

The first step toward Borelli’s “universal number of truth” would be constructing a hypothesis for what would constitute a home run — or perfect 100 score — for a particular event. Next, planners would break down that vision of success into categories and establish metrics to gauge attainment.

Different types of events might pivot on different metrics, Borelli emphasized. For example, the success of an asynchronous, online educational event might get measured in terms of screen time, quiz scores, or completion rates. By contrast, the success of a live motivational event might hinge on whether participants feel an emotional connection and a growing desire to take action — categories that might be measured with strategically timed, app-based polling for real-time responses.

“Whatever score you create initially,” Borelli said, “you’re going to have to go backward and adjust in order to replicate the buyer’s journey of a converted attendee.”

Borelli emphasized that building the dashboard would require a data analytics partner with robust capabilities. His first choices, he said, would likely be well-established CRM providers that offer a range of services, such as data capture, reporting, and tracking, as well as airtight security provisions.

It would also be ideal, Borelli said, to find a data partner equipped to handle multiple integrations with external technologies for passive data collection, such as RFID technology and biometric trackers.

As scores load into the CRM, different numbers could automatically trigger different lead follow-up actions, Borelli said. Top scores might trigger a call from a sales representative, whereas lower numbers might lead to outreach with more information.

Would Hybrid Attendees Agree to Provide So Much Data?

Some people, especially initially, might resist the idea of opening the door to data collection as wide as Borelli imagines, particularly when it comes to having their facial expressions and movements monitored. He emphasized that no data should be gathered without permission, and noted mathematical models could be built, based on scoring for people who opt in, to generate approximate scores for people who opt out.

However, he also pointed out that consent might be easier to obtain than skeptics think — if participants understand the fun engagement opportunities and other benefits that can come from sharing information.

“I think it’s really important that people want that kind of cool information for themselves, too,” Borelli said. “So, just make sure one of the stakeholders (you consider) in your events is always the attendee.”

Hacking the Future of Hybrid Events

Socio launched the EventHack Hybrid Games competition in mid-September as a way to collectively craft innovative hybrid event strategies for bringing together in-person and virtual audiences.

Every week, four new teams from top companies across the event planning, digital marketing, and technology industries presented their best hybrid event hacks to a panel of expert judges and virtual viewers who tuned in to gather new ideas.

Even though the series is now over, you can still check out every episode on demand!

And to learn more about how Socio’s event platform powers hybrid events, don’t hesitate to request a demo. 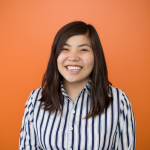 Content Writer. Avid reader. Lover of all cooking competition shows. Will stop for any and every dog she sees walking down the street. Connect with Nina on Twitter or on LinkedIn.